This is part three of a short story for kids by Ryan Cartwright – CC:By-SA If you haven’t done so you should probably begin with part one

Your majesty, these fine simians require a strong leader at this time. 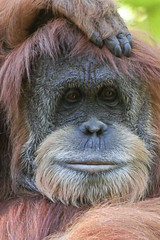 Augustus looked deep into my eyes and sat back down. I have to say I was a little disappointed because I thought he was going to show me where the piece of wood was. Whatever it was, I needed it to get back home from this world where animals fought battles for supremacy.
“Well?” I asked.
“Hmm?” Augustus seemed deep in thought. “Oh, I suppose you’re expecting me to take you to the Container. Sorry but I can’t do that. I don’t know where it is.”
“The Container is the wooden object we’ve been talking about is it?”
“Quite. It is the most ancient object on our world and whichever king holds it is ruler of our planet. It is that piece of wood that everybody is fighting for. At present it is held by the Simian king but the last battle of this age will bring an end to that if he loses to the Reptilia.”
“I’m confused.” I said, “This age?”
“The container is fought over in a series of battles with the victor ruling the planet for five years after he has won the last battle. In the final month of those five years the battles take place to see who will rule for the next five years. We call those five years an age.”
“So when you said the winner of the battle gets to rule until the next one you meant the next winner not the next battle?”
“Hmm? Oh yes that is correct my boy.”
“So what’s in it then?”
“In what?”
“This container. What does it contain?”
“Nobody knows.”

“You mean you’ve never opened it?”
“Many have considered doing so but the legends say when the container is opened life here will end.”
“You mean like a massive explosion or something?”
“Over the years many have speculated how it will end but in truth the legend only says that life will end, not how.” the Chimp picked up an apple and started eating it. He tossed one at me as well which I am glad to say I caught. I’m not sure I’d have found it in all that mess if I had dropped it.
“If you don’t know where it is, how can you help me get to it?” I said.
“I know where it should be, where it is supposed to be but if what I have heard is correct it is not there. The king has moved it.”
“When I arrived here, the container was nowhere to be seen yet it still felt like my fingers were touching it.”
“That may have been the one in your world that you could feel. Perhaps your fingers were remembering what it felt like.”
That confused me even more. “Could we at least look where the container is supposed to be?”
“It is supposed to be under the king’s throne. To remove it would require him to be not on his throne and for the throne room to be empty. Those two things never happen at the same time.”
“So how can I get to it?”
“Again, have you considered the consequences of reaching it?”
I sighed, “I know the world will end but I need to get home and this isn’t my world?”
“Would you really leave before the battle knowing it would enslave the world to one tyrant or another?”
I shrugged. “I’d like to but no, I don’t think I can.”
“Exactly.” smiled the ape, “Now I said I would help you get to it but that will not be here and now. I will help you to take part in the battle.”
“I said I’m not fighting!”
“You may not need to. If we can get you to the container during the battle all you’ll need to is open it.”
“I thought just touching it would send me back home?”
“No,” the chimpanzeefrowned, “it is not the same object as the one that sent you here. That is infusd with magic whereas this one is made of magic.”
“Made of magic?” I grinned.
“Yes. It looks like wood but it is not wood. Nobody knows what it is made of. I do know that if you open it you have a better chance of getting back to your home and this world not descending into slavery.
“So what do I tell the king? He’ll be expecting me to fight.”
“Yes but he is also expecting you to know what it is you must do. Now you do and you can tell him that you know.”
“Without telling what it is I am going to do.” he smiled as I finished his sentence.
“Indeed. Come I’ll take you back to the throne room.” and with that Augustus swept off up the corridor I had arrived through.

This entry was posted on Monday, September 29th, 2014 at 19:46 by Ryan Cartwright and is filed under Ages 7-9, Short stories, Writing. You can follow any responses to this entry through the RSS 2.0 feed. Both comments and pings are currently closed.